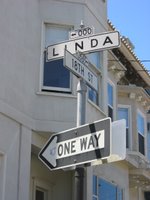 And, parallel to, and immediately west of, Lapidge is Linda…

Linda – meaning in Spanish (you know, Mi Cielito Lindo) – didn’t exist in 1898, and (judging by the architecture) probably not until the 2nd or 3rd decade of the 20th century. Instead, what is now the 100 block of Linda was, in 1898, Angelica Street, running 2/3 of a block south from 19th, just past Cumberland Place (which now deadends in the park).

Rumor has it that Tessie Wall--San Francisco's most famous and beloved early 20th century madam--grew up in this neighborhood, and retired here when she got out of "the business" in the 1920s.