About the Little Streets of San Francisco

Market Street is 120 feet wide--Van Ness Avenue is wider still (125 feet)--both are important arteries for getting around San Francisco, but what of the capillaries, the little streets, the one-way streets and those too small for cars to travel, or so steep they need steps, or too short to notice, or too unimportant to appear on most maps? For decades after the gold rush created a "sudden San Francisco," there were "streets" on Russian and Telegraph hills, they had to be scaled by wooden ladder. Horse-drawn service carts and drays were relegated, as much as possible, to the alleyways behind the grand houses--the same alleyways and little streets where parking is impossible and quaint, tiny houses now carry huge pricetags. I'll even show you Short Street if you'll be patient for just a bit.

I love exploring these little streets, and I'd love to show them to you. I invite you to come along with me on my blog adventure as I explore the little streets of San Francisco.
Posted by sfstreets at 3:41 PM 3 comments: Links to this post

In 2006, it's at the edge of the Jackson Square Historic District, during gold rush days, Gold Street was at water's edge.

1849. Gold rush days... Gold Street. Makes sense. This was the home of gold assayers, evaluating the miners' dust and nuggets.

Gold is a sweet little street. Generally no traffic at all. (But of course today, while I was leading a group of 17 walkers along Gold, an Ecolab truck drew near. We jumped from the middle of the street to the sidewalk. Then Ecolab paused, stopped, turned off the engine and the driver left the van and went inside one of the generally closed doors.... Coincidence and San Francisco traffic ruled the next event: within moments another van pulled up behind Ecolab. Van #2 had no apparent business on Gold, but instead believed this would be a cool little shortcut between Sansome and Montgomery. I didn't hang around to watch and wait for this little San Francisco traffic drama to play itself out.)

A few doors open on to Gold but the only sign to indicate commercial activity is the sign for Bix, a jazz-supper club that Playboy magazine is reported to rate as among the top bars in the country. My my. Oh, yes. And, Bix is in one of the few downtown buildings that survived the 1906 earthquake and fire, possibly a building where gold was assayed, and now an historic landmark.

(Map)
Posted by sfstreets at 1:44 PM 2 comments: Links to this post


If, as they say, God spanked the town for being over frisky,
Why did He burn the churches down and save Hotaling's whiskey?

In April 1906, fire —and dynamite— took down most of San Francisco from the Mission District to the northern waterfront and from the Bay to Van Ness. A total of 28,000 buildings were lost. A few pockets inside the burned district were saved due to the whimsey of wind and flame, or local heroism. Hotaling's was the savior of this particular pocket, that is now called Jackson Square.

Here's the story: the Army wanted to dynamite the Jackson Street buildings,
including Hotaling’s, to create a firebreak to save the nearby U.S. Appraiser’s Building. However, as the Hotaling’s manager pointed out, a few sticks of dynamite, the woodframe building and the 5,000 barrels of Old Kirk whiskey stored inside would have created rather more firestorm than firebreak. (Some say an exchange of gifts of cash or alcohol may have facilitated the decision.)

The little street named for Hotaling’s started life as Jones Alley. Close to the original waterfront, Jones Alley served the function of an alley: the service entrances to nearby businesses, a place where freight conveyances (carts and wagons), drawn by (manure-producing) horses could wait for pickups and deliveries out of the way of more proper traffic along the more major thoroughfares. For many years in the last decades of the 1800s, I. Landsberger & Co. champagne manufacturers and distributors were open for business at 10 and 12 Jones, right about where the Bubble Lounge is today. 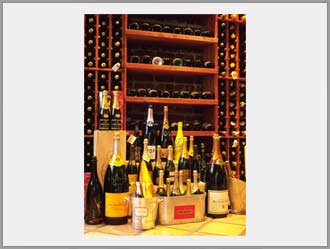 In 1903, Jones morphed into Jessop. (Perhaps commemorating New York native Andrew Jessop, a manufacturer of spices… more research needed to get the scoop on why the name changed.)


(Map)
Posted by sfstreets at 7:50 AM No comments: Links to this post