Nineteenth Century Grand Avenue. Or, more accurately, Grandiose. It’s an alley, and it only lasts one block. In fact, it’s one of two alleys (along with Washburn) that slice through the block from 9th to 10th, and Mission to Howard.

(Since the great street renaming around 1909, Grand lost some of its grandeur with a new name: Grace—which is still a touch high-falootting for such a modest alley.)

Number 35 Grand Avenue was home to the O'Brien family in 1906. 13-year old James Joseph O’Brien, his older brother Milton and their parents rented the 3-story wood-frame flat for $18 a month, sub-letting the top story to the engineer of the bath house across the street and the engineer’s wife. (The sub-renters paid the O’Briens $18/month, thus offsetting the cost nicely).

In pre-fire-quake days, Jim and his family shopped around the corner on 9th street. (Five cents for a loaf of bread, a dozen donuts for a dime. The butcher gave them free liver for the cat and knuckle bones for the soup.)

The first jolt that Wednesday morning on April 18 caused Grand Avenue’s wood-frame houses to dance a nice shake-rattle-and-roll. When the music was over (45 seconds after it started), the houses readjusted themselves and returned to their original upright, standing positions. But, while redwood sways nicely when it needs to, brick chimneys don’t. Showing little grace, the chimneys toppled, as did the contents of the kitchen- and medicine-cabinets.

But don’t worry about Jim and his family. Fire did wipe out their flat but not until many hours later—plenty of time to move their belongings south out to Potrero and Oakdale. And, the family had insurance with Liverpool, London and Globe, which paid sufficiently that the O’Briens could put up a pre-fab house with funds left over for a 14-person burial plot at Holy Cross Cemetery.

(Mr. O’Brien’s reminiscences were published in a now out-of-print volume called 1906 Remembered.)
Posted by sfstreets at 8:13 PM No comments: 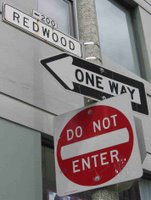 These were always narrow—the kinds of streets where the rich certainly wouldn’t live but their hired help would frequent. While narrow, they were long: 6 or 8 blocks or more. But they were still little enough not to be taken seriously, and easily erased when more important buildings were to be built (City Hall, St. Ignatius College, Mechanics Pavilion, Commerce High School, and later Davies Symphony Hall, War Memorial Opera House, the state building, and so many more).

Redwood and the others have survived into the 21st century in bits and starts. Snippets of Redwood exist as deadends west from Laguna, east from Franklin, and for a block-long shady stretch between Van Ness and Polk (shady, not from redwood trees, but from the highrise public buildings on either side). Along this shady corridor, you can now find the City Box office (seller of tickets to many cool local events), and the back door Trader Vic’s restaurant (home of the original Mai Tai, invented in 1944).

This post is a trick. You won’t find this little street any more. But, in the decades before the 1906 quake-fire, Opera Alley ran NW from Mission Street between 3rd and 4th, just next to the –then- Grand Opera House.

Famously, the world’s greatest tenor of the time (or of all times, by some accounts), Enrico Caruso sang Don Jose in Carmen at the Grand Opera House on Tuesday night April 18, 1906. Caruso was touring with the Metropolitan Opera Company here when the quake hit. Earlier in April, when the company was in Chicago, Caruso almost parted ways—Caruso intended to take the train back to New York, and then return to Italy (where the food was more to his liking). He intended to let the MOC end the tour without him. But, alas, Vesuvius started erupting, so Caruso continued on where he’d be safe.

The pre-dawn temblor woke Caruso, shaking him from his bed at the nearby Palace Hotel but not seriously damaging the building. Legend has it that he breakfasted heartily that morning at the nearby St. Francis Hotel on Union Square, but refused to return to the Palace. (He did send his butler back inside for Caruso’s eight trunks of personal items—that’s personal items, not costumes or sets or anything.)

The fires started slowly that morning but by mid-day the Opera House was eaten by flame, and by mid-afternoon, the Palace also succumbed. Caruso (along with his trunks) escaped the city, and kept his promise never to return.

Today, the Opera House is in Civic Center. What was Opera Alley in the 1890s until 1906, is now a cyclone-fenced construction pathway for the building of the Jewish Museum (projected to open in 2007). 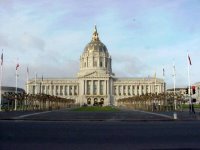 Dr. Carlton B. Goodlett Place is and is not a little street. Hunh?

It's actually an aka for Polk Street, a north-south artery one block east of Van Ness. Huunnh??

Since 1915, San Francisco City Hall has found itself sandwiched between Polk and Van Ness, Grove and McAllister. None of these even remotely qualifies as a little street. Yet, since 1999, City Hall has enjoyed a little-street address. The part of Polk Street it faces is now Goodlett Place. All the glamour of a move, without all those pesky moving boxes, tape and disruption.

What gives? As they say on the official city website:

What the official website doesn't say is that Dr. Goodlett's community activism centered on the fight with City Hall and the federal government to include Fillmore neighborhood residents in planning for the future of their neighborhood. Alas, before locals could speak, wrecking balls had destroyed not only the delapidated housing but also the clubs and businesses that were home to a vibrant jazz scene. (It took years before new housing replaced the old, and by then much of the old spark was lost.)

Daniel Burnham? But he’s from the Midwest. What’s he doing in San Francisco?

With a whopping 50 years of statehood under its belt, early 20th century San Francisco was the biggest port, the biggest industrial center, and in fact the biggest city on the west coast. Nearly half a million people were San Franciscans (up from around 500 in the 1840s). Former mayor James Phelan and other civic boosters wished to bask in the proper international recognition of our greatness. In 1903, they hired the world’s greatest urban planner (Daniel Burnham) to show us how to make San Francisco the Paris of the Pacific.

When it was unveiled, six months before the great quake-fire of April 06, Burnham's plan was clearly too costly to implement. Too many buildings would need to be destroyed in order to create the broad Champs Elysees-like avenues, the spiraling roads that would climb the hills, the grand amphitheatre and parks.

But then, voila, the city burned down. 28,000 buildings were destroyed. The perfect opportunity to start over from scratch, right? Wrong.

Each day needed for construction, was a day that businesses weren’t earning income. Private parties needed to rebuild ASAP. The city’s tax base was destroyed (and the credibility of its politicians was in the basement—but that’s another story for another day). With a reduced city budget, public projects were out of the question. Burnham’s plan was largely ignored.

But the plan had its merits, apparently sufficient merits for Mr. Burnham’s name to grace this little street. (Actually, San Francisco’s civic center—combining politics and the arts—was the one part of the plan that we followed. Thus, it's not incorrect the D. Burnham Ct. should be near civic center.)

(For a great bio of Burnham, check out the New York Times bestseller Devil in the White City—author Eric Larson manages to transform a rather dull topic (project management for the 1893 Chicago World’s Fair) into a fascinating page-turning read, by juxtaposing Burnham’s story with the nationalenquireresque but true story of contemporary serial killer Herman Webster Mudgett, aka H. H. Holmes.) 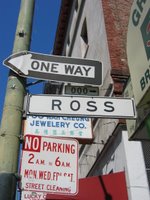 Now home to the Golden Gate Fortune Cookie Company, a musical barber, and a brass plaque-map of the alleys of Chinatown, Ross Alley’s bustling present is a very long walk from its dark past.

Photographer Arnold Genthe captured Ross as the street of the gamblers. (Genthe would spend hours standing in Chinatown’s doorways, until his subjects bored of his Caucasian face, and then he took photo after photo of this exotic city within a city.

When his subject matter didn’t appear sufficiently exotic, Genthe touched up the negatives in his lab before creating a final print.)

In 1880, national census-takers walked the alley, knocking on door after door. They found houses of Chinese boarders living next door to store keepers, tailors, cigar makers, seamstresses and cooks along this alley, then called Stout.